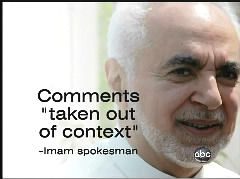 The Imam loves America... Nothing to see here... Move along...

ABC News set out Monday night to rehabilitate the reputation of the imam behind the proposed mosque near Ground Zero, Feisal Abdul Rauf, trying to discredit criticism of him from the right as Sharyn Alfonsi portrayed him as a model of religious tolerance who condemns suicide bombers, terrorism and Hamas and who deserves admiration because he “eulogized Daniel Pearl.”

The night before, in a Sunday World News story on protests over the mosque, ABC expressed sudden respect for former President Bush as reporter Linsey Davis used him to undermine opponents: “In an attempt to make a clear distinction between Islam and terrorism, within days of 9/11 President Bush went to a mosque.”

Alfonsi generously began with how “he candidly discussed his beliefs with Barbara Walters for her 2006 special on Heaven” where he promised her “the Jews, the Christians, whoever believes in God and does good will be saved.” As for whether “one man’s suicide bomber is another man’s martyr?”, Alfonsi assured viewers:

In his book, the imam wrote: “The truth is that killing innocent people is always wrong and no argument or excuse, no matter how deeply believed, can ever make it right.”

Playing a clip of Rauf saying “United States policies were an accessory to the crime that happened” on 9/11, Alfonsi noted that’s why “critics called him a terror sympathizer,” but, she countered, “a spokesman for the imam tells us the comments were, quote, ‘taken out of context.’”

She concluded with another endorsement for Feisal Abdul Rauf’s character:

And while all of the imam’s writings and interviews are now being thoroughly examined, many critics have overlooked one of his more memorable speeches. The imam actually eulogized Daniel Pearl, the journalist murdered by Islamist terrorists in Pakistan, and, Diane, he asked forgiveness for what’s been done in the name of Islam.

Sawyer chirped in: “That’s right, he was there at that memorial.”

A couple of columns with facts and concerns ignored or dismissed by Alfonsi:

From the August 23 New York Post, “Rauf: a moderate? Beware imams’ doubletalk,” by Hoover Institution media fellow Paul Sperry. And from National Review online over the weekend, a piece by Andrew C. McCarthy: “Which Islam Will Prevail in America? That is the real question at hand in the Ground Zero mosque debate.”

Sunday night, anchor David Muir announced: “Tonight, we take you to the protest, and we take you back to the days right after 9/11 when then-President Bush offered his own words about Islam.”
.
Click here for the rest of the article on the hail mary ABC Jedi mind trick attempt.

Le·gal In·sur·rec·tion:Cell Phone Psychological Warfare and Obama’s Freaky Fridays
Dick Morris: ADVICE TO GOP CANDIDATES: AVOID ADJECTIVES, NOUNS ARE GOOD ENOUGH and GROUND ZERO MOSQUE: THE REAL ISSUE and WILL HOUSE DEMS RISK A ROUT? and THE TEA PARTY RESCUES AMERICA and MICHELLE’S TRAVELS WILL TRIGGER BACKLASH and A CONTRACT WITH AMERICA FOR 2010
Big Government: Gun Owners of America Exits Pro-net Neutrality coalition
American Power: Progressive Censorship and the Ground Zero Mosque and Continued Debate on Ground Zero
Frugal Café: New Yorkers, Never Forget: 9/11 Mega Mosque Protest Rally Info & New Hit Song “Salt in the Wound” (video) and Krauthammer & Rove on Pelosi’s Loony Ground Zero Mosque Comments (video) and Disneyland Being Sued by Muslim Female Employee: Wants to Wear Her Islamic Headscarf While Working As Hostess (video)
Nice Deb: The Media’s Double Standard In Reporting Ground Zero Rallies and Bill Whittle: Ground Zero Mosque Reality Check and New GZ Mosque Video: Salt In The Wound
American Thinker: One Mosque at a Time and Now, why would 20% of Americans think Obama is a Muslim? and A Coming Landslide? and Obama’s Point of No Return
Sister Toldjah: ‘Some of the most expensive schools are found in low-performing districts’
Texas4Palin: Day By Day (August 24, 2010) and Quote of the Day (August 23, 2010)
LisaInTX: Steve Quayle: Return of the LongWalkers, Alien Invasion and the Rise of the One World Government and Video: What Matt Simmons said about the gulf oil spill before his death (six interviews) (via dprogram.wordpress.com) and Eggdom Control in the Works? and Court Martial for Military Personnel for viewing WikiLeaks? WTH??
Voting American: To Arms, to Arms, the Commies are HERE!