Obama simply can not, will not, accept voter informed intelligence thus immunity to Leftist propaganda. BS is BS despite Obama constantly switching the shades of  lipstick he applies to that Socialist pig and the number of times Obama applies it and trots it out over and over again expecting a different result.

Obama to Voters: Really folks, IT’S NOT A PIG.
LOOK, I’M OBAMA. WOULD I LIE? 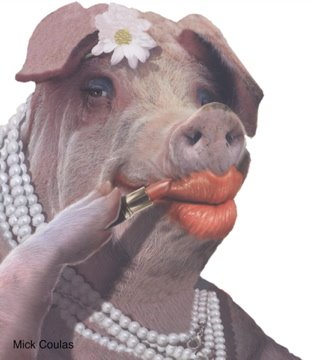 Obama summed up that snake oil salesman version of reality at the very end of his dog and pony Feb-25-10 Health Care Show by delivering a very clear message directly to Conservative/Moderate House Democrats who’s vote he presently does not have.

Actual Reality: The mid-term elections will be a decisive and dramatic DEM Congressional LAYOFF; the die has already been cast.

But… based on “Reality According to Obama” he, the Best Snake Oil Salesman in the History of the Universe, is unwaveringly determined to persuade moderate/conservative House Democrats that reality is not reality …that they will magically be re-elected in November 2010.

Obama is a 99.9999999% pure Elitist Socialist Ideologue and Imperious Demagogue thus his self-belief that he is an all powerful God on Mt Olympus who shall have his way no matter what… to move forward his Senate Reconciliation Ram-Down of the worst legislation in the history of the country.

Then? that he shall overcome voters and force enough votes in the House to pass it.

My, but Obama has a high opinion of himself, eh? Think he is going to handle failure and being limited to a single term? I think he will flip his lid and drown in a sea of utter hatred. Perhaps he can replace MSNBC’s Keith Olbermann as is the Mad Hatter of the Socialists.

Barack imperiously claims his Socialism has the high ground over voters’ Conservatism, thus those pesky voters are putty in his Godly Hands despite a growing mountain of polls showing an overwhelming and ever growing voter rejection of his ObamaCare bill and any Congressmen who votes for it.

Problem for Obama is… these Moderate/Conservative House Democrats will be voted out of office because enough voters are involved independent thinkers; voters who judge for themselves why this ObamaCare Monstrosity is a death warrant to the country’s economy.

Obama has no Socialist propaganda magic wand he can wave in the air that will change our voter rejection of ObamaCare. Obama can not put a stop to the success of our grass roots efforts in opening more and more voters’ eyes so they too can clearly see the danger of this Obama inspired Naked Socialist Power Gab in the guise of Socialized Health Care.

This is not China, Venezuela or Cuba… and Obama is not the Man-God he thinks he is.

Obama is rejected… and no way is he capable of accepting the truth that his dream of an Obama Socialist Transformation of America will not be allowed by voters.

Obama has already failed… and he will be the last person on earth to admit it.

Le·gal In·sur·rec·tion: Founding Fathers Are Role Models For Progressives? and Just Don’t Call Us O.J. and Sad Thing About It and Obligatory “Obama Was Against The Nuclear Option Before He Was For It”

HOT AiR: Biden: How wonderful to have a job where I don’t do anything! and Obamateurism of the Day and Quotes of the day and Rangel: Yes, I’m being admonished for ethics violations, but it’s totally not my fault

BigGovernment: Did Andrew Breitbart ‘Breakdown’ At CPAC? and Friday Free-for-All: Elba Edition and Reason.tv: Treat Me Like a Dog!: What human health care can learn from pet care and Hidden Healthcare Reform Objective: Feds Want to Know Your Number

Nice Deb: Dems vs The CIA (Again) and By The Way – Obama Was Wrong About Insurance Premiums and More Videos From The Health Care Summit: Issues vs Tissues and Video: Fireworks Between McCain and Obama During Health Care Summit

SamHenry’s Blog: It’s Theater of the Absurd, Mr. President. and IS Chavez Using The Falklands and Columbia to Draw Britain and the US into Regional Conflict?

Dancing Czars: Musings on the Health Care Summit: What was accomplished and Exclusive: Lindsey Vonn To Present Gold Medal, To President Obama and House Republicans Gave Obama Their Health Care Proposals Weeks Ahead of Thursday’s Summit and Why The Nuclear Option Is Unfair….How Quickly They Forget: See Obama, Reid, Schumer, Feinstein, Hillary,Biden, and Dodd and ObamaCare at Ramming Speed