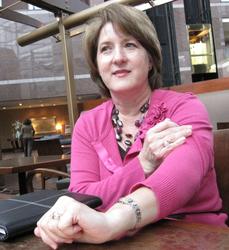 While the Progressives/Socialists would love to discredit the totality of the many many millions of voters in The Tea Party grass roots coalition with the likes of the whack-job 911 Truthers, it is not happening and it is not going to happen.

Debra Medina, candidate in the Texas Governor’s race is a fringe whack job who stated on the Glenn Beck Show that there were “some very good arguments” that the U.S. was involved in bringing down the World Trade Center on Sept. 11, 2001.

These tinfoil hatters are dismissed outright, as they pop up, by rational reasonable common sense voters in groups like the Tea Party grass roots coalition.

Lets see what is being reported in the Texas press, shall we?

[Governor] Perry said Medina’s remarks “were an insult to the thousands of Americans who lost loved ones.” He countered that anyone “should be ashamed” for suggesting involvement by former President George W. Bush’s administration. Bush was Perry’s predecessor as Texas governor.

Hutchison stressed that it was “al-Qaida terrorists who declared war on America. To suggest otherwise is an affront to the men and women who are sacrificing their lives to root out the terrorists in Afghanistan and around the globe.”

Beck, who is influential among the Libertarian-leaning voters that Medina has attracted, said he had been flooded with mail since he announced she would be on the show. Medina said in the interview that she has not been questioning the attacks publicly.

“There was a theme that ran against you, and that is, you are a ‘9/11 Truther,’” Beck said, referring to the term given to people who doubt the official account of Sept. 11.

“While I don’t endorse anyone … I think I can write her off the list,” Beck said. “Let me take another look at Kay Bailey Hutchison if I have to. Rick, I think you and I could French kiss right now.”

Click here to see the rest of this article.

Le·gal In·sur·rec·tion: Patches, We Hardly Knew Ya and Possible Reason Why Patrick Kennedy Not Seeking Reelection and Palin As Chess Master / Palin As Sexy Puppet

HOT AiR: King to Paterson: How does it feel getting blindsided? and Camelot finally creaks to an end and Fumble! Reid pulls jobs bill White House had already endorsed and Obamateurism of the Day and Quote of the Day and Video: Frozen Wasteland and Obama, Biden and Iraq: Profiles In Perseverence and Obama approval at 46%, says … CBS

Dick Morris: OBAMA’S P.R. HELPS TERRORISTS and GOP’S HEALTHCARE MOMENT and HOW THE GOP WILL WIN THE SENATE and THE OBVIOUS DEFICIT-CLOSERS and BEHIND OBAMA’S PHONY DEFICIT NUMBERS

BigGovernment: Why Obama’s Going to Have to Raise Taxes on the Middle Class and Google ISP Initiative Raises Eyebrows, Privacy Concerns and The Official Unraveling of the Obama Presidency and Friday Free-for-All: Lincoln Edition

Nice Deb: Perfect Storm Will Mean Snow On Ground In All 50 States and “O America”: A Video Tribute To Sarah Palin and Biden: Iraq “One of the Great Achievements of this Administration” and Democrat Slush Fund Pays For Anti-Tea-Party Campaign

Talk Wisdom: Why Is ObamaFRAUD Admin Clueless About Jobs? and Willfully Blind to the Jihad and Two Inspiring American Lives and Palin Speech Sets Off Lib Cranial Detonations

Good Time Politics: End of an era of Kennedy politics in America and American voters are able to see what the left really has in mind

Temple of MUT: You think they have any idea what’s about to happen to them?

Dancing Czars: Pelosi aide says Democratic congressional leaders have settled on legislative “trick” to pass Obamacare; So why have a summit? and Has the Iranian Midget Overstated Iran’s Nuclear Capability? and Tax Hikes for the Middle Class? and Earth to Obama we are getting sick and tired of you blaming President Bush for your Economic Problems