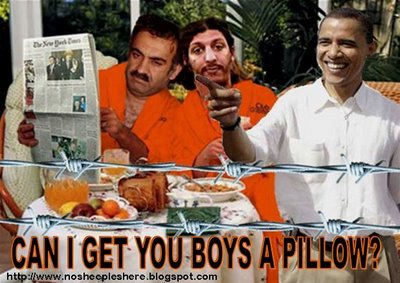 Osama is doubtlessly laughing at Obama from the safety of Pakistan over Obama’s Politically Correct fumbling & bungling approach of dealing with Al Qaeda’s “Crime Spree.”

Hell.. Obama is in violation of his own executive order to close GITMO before January 22, 2010.

Did Osama respect Bush? You bet your sweet fanny he did.

Does Osama respect Obama? What do you think???

Days before President Obama plans to present his State of the Union address to a joint session of Congress, Osama Bin Laden sent his own message to the American people. According to CNN “A new audio tape allegedly from al Qaeda leader Osama bin Laden claims responsibility for an attempt to blow up a plane en route to Michigan on Christmas Day and warns the United States of more attacks.” The report added, “The tape, which aired on Al Jazeera on Sunday, says ‘the United States will not dream of enjoying safety until we live it in reality in Palestine.”

When Bin Laden speaks the President should listen—particularly as he drafts his remarks to the American people. Here is why. Since taking the White House the president has relegated the war on terrorism to one speech at the National Archives and a litany of pronouncements to distance his administration from Bush—closing Gitmo; curtailing CIA-led interrogations; and terrorists from Military Commissions to high-profile trials in the United States.

What the president has not done is demonstrated he takes Bin Laden’s words seriously. That is a mistake the United States has made in the past—and one Obama repeated.

There is much that the President could do in his speech to recommit his administration to winning the Long War.

He could clearly state that winning in Afghanistan and protecting America’s vital interests are more important than arbitrary withdrawal deadlines. He could pledge to use all the tools in the terrorist fighting toolkit including Gitmo, commissions, and the Patriot Act. He could pledge to rebuild the American military rather than gutting the defense budget for modernizing our forces. He could pledge to be a real war president 24-7-365.

Or he could leave Bin Laden’s rambles go unchallenged.

Le·gal In·sur·rec·tion: Dems’ Strategy of Crazy and Please Tell Me This Is Not So, Please and  Get Out of the Way While We Clean Up Your ObaMess and  Get Out of the Way While We Clean Up Your ObaMess and  and What Don’t You Understand About The Internet
HOTAiR: UK: sudden increase in “no-fly” passengers trying to board planes to … and Gov’t pulling out of mortgage support as home resales plunge and Biden officially drops out of DE Senate race and The 50-minute man and Ellie Light speaks … and speaks … and speaks …. and Democrats rethinking “blame Bush” strategy after Massachusetts flop and “Indiana Obama” or “Choosing Poorly” and WH fumbling jobs, ObamaCare messages
Dick Morris: DEFEATING OBAMACARE: THE NAIL IN THE COFFIN and MASSIVE TSUNAMI IN MASSACHUSETTS, CONTINUE IT and THE NEXT BATTLE: STOP SOCIALISM
Heritage Foundry: Hugo Chavez Shuts Down Cable Channel Amid Growing Popular Unrest and Bin Laden: Can You Hear Me Now? and I Robot…Not and The House and Senate Cloakroam: January 25-29, 2010 and President Obama and the War on Banks
BigGovernment: Call For An Audit of Obama’s Campaign Finances and Hitler’s Other Little Helpers – IBM And GM/Opel and Obama to California “Water, Its Not a Right its a Privilege” and Minority and Civil Rights Groups Slam Net Neutrality and Monday Open Thread: Early Retirement Edition and Health Care Reform: The Dog That Was Not Allowed To Bark and Scott Brown Win Is a Victory For Bush Foreign Policy, Defeat For Ron Paul Isolationism
Hillbuzz: STUNNING ADMISSION: UK scientists admit they make up data for political reasons to support Church of Global Warming and Question of the Day: Which races should we follow in 2010? and The Illinois Sente Race and Monday Open Thread: January 25th, 2010 and Who is Sean O’Sullivan and what web sites does he run?
Gateway Pundit: Figures. White House Awarded $25 Million No-Bid Contract to Big Dem Donor and Chemical Ali Executed in Iraq – Murdered Thousands of Kurds With Chemical Weapons (Video) and Detroit Christmas Bomber Interrogated For Less Than One Hour; Gibbs Defends Administration’s Actions and Pelosi Claims House Dems Are Focused on Jobs But Unemployment Has Doubled Under Her Watch and Like Obama, James Carville Blames Bush For Coakley Loss and Iranian Official On Obama: “The Only Change Is That This N***er Talks About Regime Change”
Sister Toldjah: Astroturfing campaign underway by Team Obama?
Nice Deb: Is Recent Astroturf Campaign Part of Dept of Justice Propaganda Unit? and Video: No Rules For Radicals and Obama/Pelosi/Reid’s Dastardly Plan To Pass ObamaCare and Axelrod Defends Obama’s Shock and Aw-ful First Year On ABC’s “This Week” and Astroturfing Makes a Comeback Updated
Frugal Café:Saddam’s Mass-Murdering Cousin, Chemical Ali, Hanged in Iraq… Suicide Bombers Retaliate & Kill 37, Injure 104 and Ouch… Jay Leno Zings Obama Following Scott Brown’s Win in Massachusetts and Hello, Train Wreck: Obama’s Agenda Is Crashing… Calling Bill Clinton on Advice to Get Out of His Mess? andGlaciergate: Global Warming Is Bogus, Just a Money Scam… IPCC Admits Himalayan Glaciers AREN’T Melting Away and Best Photo of the Weekend: Barack Obama & His Teleprompter Go to School (video) and Osama Bin Laden Taking Credit for Christmas Day “Underwear Bomber” Plot
Talk Wisdom:Ten Most Corrupt Politicians and Che – The Evil Murderer and Americans Still Question Obama’s Legitimacy to be POTUS and The Lies of Obama
Michelle Malkin: Another broken promise: “I will finally end the abuse of no-bid contracts once and for all” and Dear Cindy & Meghan: Let’s talk about who’s really being silenced over Prop. 8 and Why did Beau Biden really drop out?; Update: Cook Political Report classifies DE-Sen. race “Solid Republican” and Rat Rally: Backlash against Ben Nelson still growing and The Astroturf Presidency

Boudica WPI: Howard Dean: GOP Won in MA Because Obama Not Liberal Enough. and What a moron, but still ahead of Obungle and company. and Minnesota man faces fines for anti-muslim images and Obama talks to a 1st grade audiance. (correction 6th grade + video)) and Obama talks to a 1st grade audiance. (correction 6th grade + video))
GoodTimePolitics: Obama Falls into a BIG SINK HOLE (still campaigning) and Missouri’s race for the U.S. Senate and Barack Hussein Obama Wants To Retreat From His Attack On Our Health Care and  SC Senate affirms state’s rights, says ‘no’ to Obama health care
LisaInTX: Some News on Israel: Interesting point of Views regarding Zion and Progressives: MLK was a RADICAL SOCIALIST?? OMG? and Should Presidental interpretation “supersede” judical court rulings?
Diary of a Mad Conservative: America Rising with no sympathy for Obama and Global warming crooks and scammers
Moonbat Patrol: Plouffe Hiring Signals Obamas Focus On Populism, (video)
M2: The Democrat-Socialist “Solution” to Healthcare Can be Summarized with 2 Words
SamHenry’s Blog: A Vengful Return to Obama the Enforcer and Obama Unleashed
WarrantOneGirl: Obama to grant TPS (Temporary Protected Status) to undocumented Haitian immigrants-(Temporary?) Another Lie and Apostle Claver tells the world how the real party of racism is the Democrats and Progressives: MLK was a RADICAL SOCIALIST?? The Left IS Dillusional!
Temple of Mut: There ought to be one day — just one — where there is open season on senators. and Live by the Alinsky Rules, Die by the Alinsky Rules
Dancing Czars: Are you a racist? African Stereotypes: Chicken & Watermelon and A New Operation and Great Site: Special Ops and Quote for the Day and CLASS WAR: HOW PUBLIC SERVANTS BECAME OUR MASTERSCLASS WAR: HOW PUBLIC SERVANTS BECAME OUR MASTERS and No Comments Necessary and Judge Andrew Napolitano explains why Obama’s newly appointed, unelected, unaccountable, czars are taking power from congress and are totally unconstitutional. and What Do Jesus, Rifle Scopes and Dead Terrorists Have in Common? Trijicon and Isn’t it particularly interesting to hear Wayne Rathke, founder of ACORN and running SEIU Comment on the 2010 Elections? and These Fools Represent What Country? Biden says The U.S. Will Appeal the “Dismissal” In the Blackwater Case and AMERICA vs. TYRANNY OF THE AMERICAN MEDIA and Best Quote of 2009 and To Be Filed Under Birds of a Feather are Predators Together and Mort Zuckerman a Liberal, Explains Why the Obama Administration is Failing

26 Responses to Osama to Obama: notify the defense lawyers, I’m starting up a new crime spree ;)