Lieberman – One against Many; it is a matter of his principles: Update: Joe didn’t blink, they did

Well… it appears that Joe Lieberman stood his ground, no vote from him if the Senate’s version of ObamaCare includes either expanding Medicare for people between the age of 55-64 or a government-run insurance option AKA a single payer plan.

Obama and Reid appear to have agreed to drop both provisions to get his vote.

Ahhh… but there in lies the rub! mmmoooouuuuaaaahhhh

Without a Public Option, Hard Leftists are vowing to vote against the bill. Woe is Obama, Woe is Reid. We shall now see what unfolds over the next days as the Brass Ring continues to elude the Socialists in their bid for absolute power.

Democratic votes may stay home from the polls in retribution for Congress failing at health reform, a top liberal lawmaker said Tuesday.

Rep. Lynn Woolsey (D-Calif.), the co-chairwoman of the Congressional Progressive Caucus, said that members of the Democratic Party’s base “aren’t even going to go to the polls if they don’t have a public option.”…

“I don’t see what we’ve accomplished,” Woolsey said. “If we were going to have insurance reform, we could have done that very simply. If we don’t have a public option and at the very least we don’t have a Medicare buy in then we aren’t offering any competition to the insurance industry.”

She says she doesn’t know if she could vote for Reid’s bill. 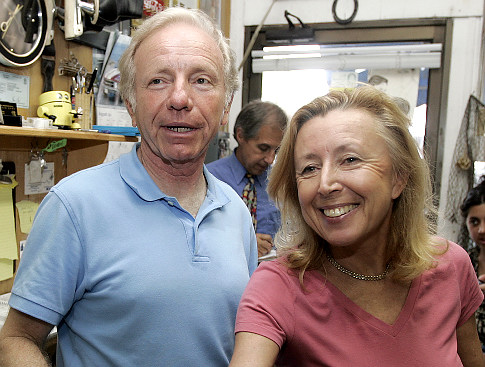 I do not see Joe Lieberman’s taking of a principled stance as being afraid of having Socialists as enemies when the stance taken is opposition to expanding Medicare for people between the age of 55-64 and opposition to a government-run insurance option.

The Socialists fully understand why he is opposed to their scheme… his opposition is a rejection of their goal of fundamental transformation of America into a Socialist Nation.

It must infuriate the Socialists to the point of total absolute rage that it has come down to one single man who puts his American common sense and American principles ahead of a political party’s sole goal of grabbing power for themselves at the expense of the American People.

The drama will unfold and we shall see who blinks and who doesn’t blink.

I will be updating this blogpost as the information comes in. But be assured, Obama’s calling front and center of all Senate Democrats to the White House today is a tactic of pure intimidation.

Meanwhile… Obama Surrogates at Firedoglake are using  ‘THE PERSUASION OF POWER” tactic of SEIU’s Andy Stern to attack Joe’s wife Hadassah by calling for a boycott of the Breast Cancer Organization for which she is a spokeswoman until Hadassah is fired.

What kind of people boycott a breast cancer organization for their political gain?

Answer: Socialist organizations like FireDogLake and those signing their boycott  petition: 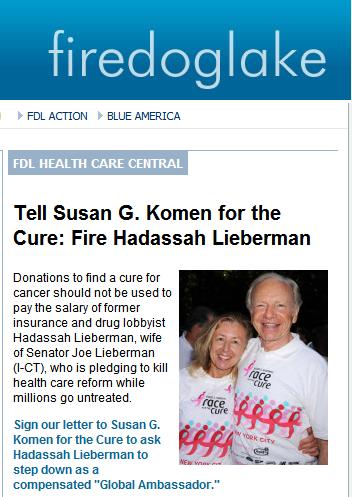 This is not going unnoticed, Socialists… your tactics are Un-American, and there is a price you will pay in Public Polls, ergo… the Voting Booth, and it will be to your bitter sorrow.

Hey Socialists? Looks to me like your Public Option Holy Grail is Kaput. That it is a Socialist Ploy to turn the United States of America into a Socialist Country is now clearly understood by enough Americans to reject it, is a fact. Pisses you off, huh?

Americans?
Fight FireDogLake With Determination and Strength of Character 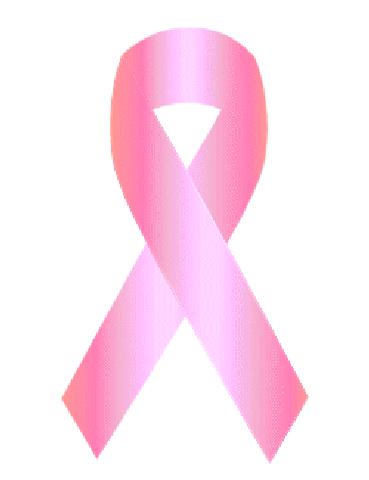 Donate to the
Susan G, Koman for the Cure
in the Name of Hadassah Liberman.

Show The Socialist Scumbags that Two Can Play that game.

We can do it from the Moral High Ground.

H/T To Le·gal In·sur·rec·tion for his idea of how to Support Hadassah Lieberman!

Please click on the following link to donate in Hadassah’s name:

Conservatives For Palin: Governor Palin Continues to be in the News and Palin Vs. Gore: Oceans Apart and Alaska Bloggers Reach New Heights of Immaturity
Animal Farm:
ArleneArmy’s Blog:
Boudica WPI:The second most hated Repuplican woman in the country or?
Diary of a Mad Conservative:Hey there Obama…
Moonbat Patrol:Democrats Spending Like The World Will End In 2012. News Flash IT WILL FOR THEM! and The Obama Conundrum
OhioBelle’s Blog: OBAMACARE PACKED WITH MORE LIES
SamHenry’s Blog:Climate What? Who? Cheerless Foreign Press Coverage of Copenhagen Confusion and Unwanted Remains of Christmases Past – For My Friends at VotingFemale Blog
WarrantOneGirl:
VotingFemale Speaks!:Sarah Palin, a Media Star; Obama, Media Liability
Temple of Mut:A Sign of the Times (…..actually two!)
Dancing Czars: Reporters Catch Gore in A Whopper and Absolute Proof That Olberman Has Spun a Lugnut! “No Liberal Media Bias”

240 Responses to Lieberman – One against Many; it is a matter of his principles: Update: Joe didn’t blink, they did