Obama said: No Weapon Formed Against Him Shall Prosper; Freedom of Speech is THE Weapon Most Feared by Communism

The First Amendment
is the Mortal Enemy
of Communism

The Obvious Tactics
Against
The American Weapon
of Free Speech? 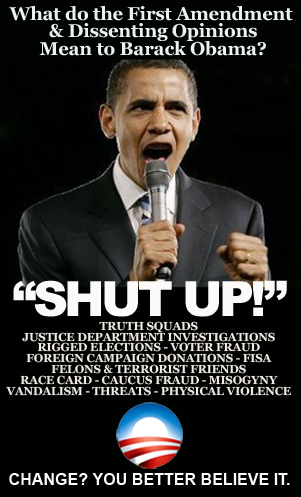 Vocal strong fact-based “in their face” opposition to Communists seeking more power each day within the government of the United States IS THE REASON THERE IS A FIRST AMENDMENT.

Communism
Within the US Government
Is Stoppable

True Americans are not going to just “settle down” and accept Communism as inevitable… and neither did occupied France in WWII with respect to Occupying Tyranny.

There is no surrender to the Communists… and our Freedom of Speech is the weapon we use…. our will is undaunted… and our Liberty Based Will as free American Citizens, thus our votes, UNSTOPPABLE.

True Americans who give up, who do not understand, and who underestimate the determination and the tactics of those attacking our fundamental Liberties do not deserve to have them.

The Communists fully and completely realize they MUST DEFEAT the First Amendment or LOSE their War on American Democracy.

Their Strategy is Attack and Control Opposing Forces…

The Communists move to Protect and Project their Coalitions of Power, such as ACORN, SEIU, The Apollo Project and thousands of others.

The Communists defend themselves today as “Defenders of the Downtrodden” just as Communists have done for a Century …a time tested tactic to destroy Liberty.

I am a female voter, as my blog name implies. I vote for conservatives. I am a political opponent of Leftists, Progressives, Socialists, Marxists, and Communists.
View all posts by VotingFemale →
This entry was posted in Freedom of Speech and tagged American Liberty, Barack Obama, Barney Frank, Communist Propaganda, First Amendment, Freedom of Speech, Harry Reid, Nancy Pelosi, Obama CZARS, Obamaist Communism, Sarah Palin. Bookmark the permalink.

32 Responses to Obama said: No Weapon Formed Against Him Shall Prosper; Freedom of Speech is THE Weapon Most Feared by Communism