Posted on September 17, 2009 by VotingFemale

They are not Your Grandfather’s Main Stream Media anymore…

Ohh… the slow motion fall from grace and relevancy has been like watching three Japanese Zeros in slow motion colliding against a mighty US Battleship… The American Main Stream Public. 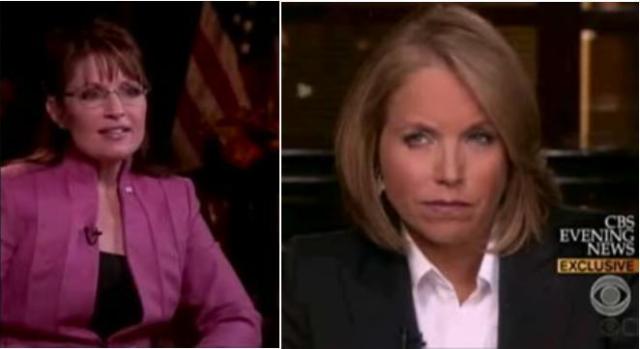 CBS Couric – Get away from MY Socialist Party, you bitch.

ABC Gibson – Get away from MY Socialist Party, you bitch.

The Kamikaze Media’s hatred of Sarah’s charm, popularity, and political appeal, which were eclipsing Obama’s, was so thick it dripped like cold molasses down the arm of a two year old licking a spoonful of it.

Time to roll out the Gotcha Journalism WMDs and destroy this woman… this, this Bitch.

Enter Katie Couric and Charlie Gibson. You remember ole Charlie right? He is the one soon to be out of a job. Seems ABC thinks they can throw him under the ABC Bus to save their news organization from bankruptcy.

These two Socialist non-journalists sounded the battle cry, blew the trumpet to signal the charge, took out their knives and started carving up Sarah who expected fair and balanced media treatment.

What has transpired on the airwaves since those two interviews with Palin …what has been emanating from the Three Alphabet Soup Broadcast News Networks, the Kamikaze Media, has been nothing short of their drinking of Journalist Hemlock on a daily basis.

The mistake they all made was a simple but devastating one… ABC CBS NBC Believed they actually influence Mainstream America. They don’t.

In one of the latest Journalist Sword Swallowing Acts, Charlie stated he had nothing to report to America about an ACORN Scandal because he had no knowledge of an alleged  swirling ‘Hurricane ACORN’… does not know the Census Bureau had Canned ACORN …does not know ACORN employees were filmed handing out guidance,  advice, and support to break State and Federal Laws, and how to Evade the IRS, and fraudulently obtain business loans for Brothels using illegal alien Children as Whores.

And, Charlie Gibson’s audio taped reaction to why he was not reporting the ACORN SAGA???

Race 4 2012: Gibson Interview and Why It Still Matters